This is a story about a man and his fruit scale.

Like young men his age; hopes and dreams cling on the promise that hard work is the bridge to arrive anywhere. In a land teeming with vegetation and natural beauty it was an easy decision to sell oranges, limes, pomelos and grapes. There are two key components when it comes to selling fruit: a cart and a fruit scale. The scale is the most costly item. Without it, you are a just a man loitering in the streets.

Mohamed Bouazizi knew that there was another element required to sell fruit; a permit. The process and cost to getting a permit seemed too obstructing, so it was normal for fruit vendors to ignore this and simply pay officials under the table to grant them permission.

For seven years, Bouazizi sold fruit. You could say that he was doing this to make ends meet. But the truth is, he had something more important in mind. He wanted to earn enough money to send his sisters to college.

On December 17, 2010, Bouazizi was approached by a female officer to show his permit. This had happened many times before. Each time he would pay the bribe (a full day’s wage) and would be left alone. But this time, the emotion of compounding anger caused him to complain. In response, the officer slapped him and confiscated his cart and scale. The indignation of this form of humiliation was too much to take.

With fury, Bouazizi went to the provincial headquarters to complain and get his scale back. He needed that scale to continue working. But the doors would not be opened for him. No one cared to hear the complaints of a 26 year old fruit vendor.

Bouazizi left only to return again a few minutes later. He stepped in the middle of traffic that faced the headquarters, poured gas on himself and cried out, “How do you expect me to make a living?” then lit a match.

Even though 90% of Mohamed Bouazizi’s body was burned he managed to live for a few days in a coma.  He died on January 4, 2011. His immolation sparked protests throughout the country of Tunisia. President Zine El Abidine Ben Ali dealt with these uprisings through violent gunfire. What is tragic about this response is that Tunisia is a peaceful country where guns are very scarce. It was no wonder that a regime full of corruption, oppression and fear that these acts of violence were kept private from the world’s attention.

However, through Facebook, young Tunisians were able to broadcast videos of these shocking scenes and spark wider attention. President Ben Ali was surprised by the public outcry that he resorted to a sleazy PR scheme that involved a photo of him visiting Bouazizi in the hospital. 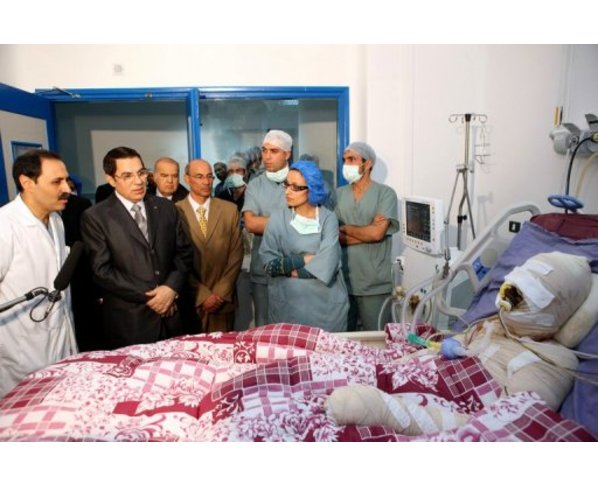 This stunt did not work.

Despite the risk of getting shot, tens of thousands of Tunisians rallied against Ben Ali and his regime. In a shocking turn of events, instead of retaliating, Ben Ali fled to Saudi Arabia on January 14, 2011.

For the first time in the Arab world; a dictator was toppled by his own people.

No one would have thought that a young man and his fruit scale would spark the revolution that is currently sweeping North Africa and the Middle East.