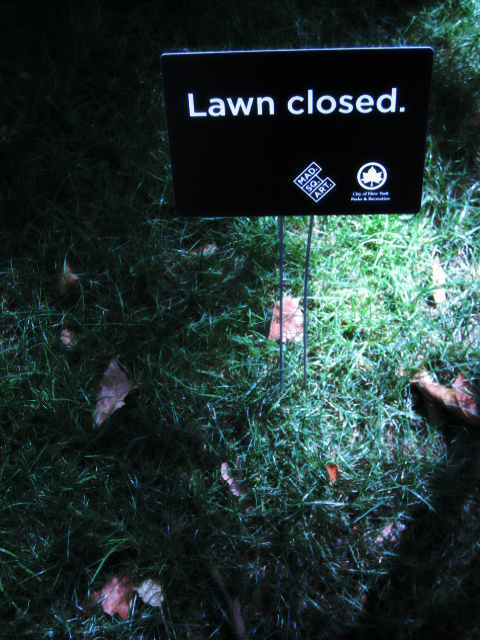 Last week I had an unannounced political party sign protruding from my lawn.  The irony of this was that it happened to be the one party I’m unlikely to support. With the immediacy  of an unwanted zit the sign was removed. Thoughts swirled in my head of how something like this could happen…

Was it a simple administrative mistake?

Is someone playing a joke on me?

Or was it, as a friend quipped, “a sign from the Lord”?

In a weird way I felt violated by this inane act.  There is something disturbing about having someone stick a sign on your front lawn without your permission.  It is like someone ordering a meal you never wanted. Or having someone christen your child with a name you hate. I lament that for those few hours, people who walked past our house assumed we were avid supporters of this candidate and his party.

In many ways, it seems that Canadian citizens don’t really care what sign is on their lawn.  In the 1984 Federal elections 75% of Canadians voted. In 2008 just a little below 59% cared enough to vote.  In conversations with people I’ve noticed that some of the apathy stems from feeling unprepared with the knowledge necessary to make an informed decision.  We are bombarded continually with attack ads, news coverage and photo ops that can leave us feeling dizzy. Not to mention cynical.

In response to this I’ve come up with some simple suggestions to help you get informed and engaged so that when May 2 comes around you’ll feel like you just voted on American Idol.

1. Find out what YOU value. Forget what the pundits or analysts are saying. You are the most important person in this election campaign. You are the prime target that everyone is wanting to sway to their side of the wall. It’s like a Junior High dance and you’re the belle of the ball. EVERYONE wants to dance with you. So ask yourself, “What issues are important to me?” “What concerns grab my attention?” “What things get me angry?”

2. Find out how your values align with the political parties. There has been much controversy stirred about CBC’s Vote compass. It doesn’t surprise me that Sun media would sensationalize this and accuse the political scientist responsible for a biased survey. The truth might actually be less spectacular. Read here. I completed the survey and found it helpful to see where each party stands on specific issues.  The result I got is not reflective of who I will vote for but it was interesting to get an idea of where my values align with other political parties. The survey takes a few minutes so head on over to CBC Vote Compass.

3. Meet the politicians from your riding. If a politician rings your doorbell don’t pretend nobody’s home. Open your door and introduce yourself. Let them do the talking and when they’re done feel free to ask one or two questions. If you don’t want to wait feel free to attend a public forum.  All of them will be holding some sort of forum so check their website and attend.

4. Watch a televised debate. On Tuesday April 12 (today) at 5 pm tune to CTV to hear in the flesh what each leader has to say. This is the equivalent of gladiators on a death match. (well, not really) But at least you get to see the leaders in all their unscripted glory. I’m personally excited to see Ignatieff and Harper duke it out.

5. Choose the media voices you are going to listen to. In the midst of a flurry of voices, deciding who and what to listen to can seem very daunting.  I’ve decided to navigate through this in practical terms. Like choosing ice cream at Sylvan Lakes’ The Big Moo, I often go with 1 of 3 selections that I know I can count on. There are great opinions and thought out there so take your time. But when you find “the one” don’t let’em go. The criteria for my selection is easy: Understandable. Here are the people and sites I’ve chosen to inform my decisions: Rex Murphy, your boyfriend George, Maclean’s Promise Tracker and Bull Meter, Chad Verity’s blog Indecision 2011.

6. Decide the “strategy” of your vote. I’ve settled in my heart that I will vote for my local political candidate. This means that I’m basing my decision on her merits rather then the party leader she represents. Some of you could care less who the candidate is just as long as the party leader wins. Each decision is fine. The point is to understand the weight of your vote.

7. On May 2 Host an “Election Party”. Why not make elections fun? Light up your BBQ and invite friends of all political stripes to your home for a pot-luck dinner party. Everyone can come wearing a colour reflecting their party. You can have a look-a-like contest. Or even a rousing game of “pin-the-tale-on-the-politician”. Feel free to begin the night with the national anthem. In countries like Egypt and Yemen the idea of a democracy was won by many sacrifices. Here in the West, the least we can do is celebrate the freedom we have by actually voting and enjoying the process.