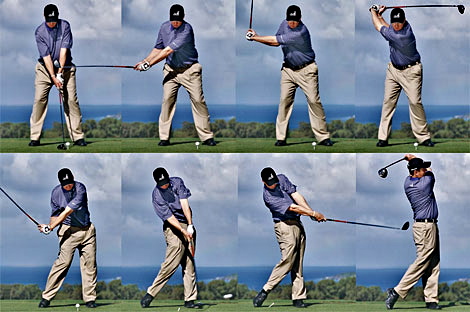 Pete Rollins, in his book Insurrection shares the following story:

“Every Sunday the pastor would stand at the front of his Church and with a booming voice finish his rousing sermon with a plea:

‘Each week I go to a nearby town and serve the poor, the oppressed and the downtrodden; what do you do? How do you show your compassion to those in need?’

People would applaud the minister’s closing remarks and everyone would wave him off at the end of the service as he hurried away in his little car.

The truth, however, was that each week he would go to a golf course and play a leisurely eighteen holes away from his congregation, family and friends.

This deception had been going on for years, but eventually it came to the attention of some angels. They were furious at his lies and reported the situation directly to God.

After a little consideration, God said to the angels, “I will visit with this minister on Sunday and teach him a lesson he’ll never forget.”

Sure enough, next Sunday, God showed up at the Church. Yet again, the minister informed his congregation that he was going to go serve the poor.

This time however, God intervened. When the minister arrived at the golf course as custom, he took his first shot, the ball took off, flew through the air, bounced onto the green, and dropped into the hole.

The minister was amazed. At the second hole the same thing happened. And the third. And the fourth. Right through to the last hole.

With his last stroke, the minister sliced the ball badly, but still it curved around and, like all the others, found the hole in one.

All the while the angels in heaven watched what took place in utter disbelief. By the time God returned they shouted, “I thought you were going to punish the minister for all his lies, but instead you gave him the perfect round of golf!”

“That may be true,” replied God with a smile, “but ask yourself this: Who is he going to tell?”

The pastor’s punishment wasn’t sickness, a near-death experience or financial ruin. Instead, it was his inability to communicate something magnificent! For the rest of his life, he would live with the misery of knowing that he played the best game of golf the world has never known.

Can you imagine experiencing something so miraculous without ever being able to share it with anyone?

This punishment says something very profound about human nature.

The most sought after thing in the world isn’t gold, diamonds or pearls. It isn’t the newest piece of technology or the most luxurious beachfront resort.

Rollins makes a case that what we seek most “is the attention, of those whom we desire.” Because really, what do all these things mean if they can’t be shared with others? We remain trapped like this minister, holding the most amazing stuff, without ever being able to experience any of it with anyone else.

I was at the hospital this past year due to some family emergencies.

When we go to a hospital, all that we can offer the person lying on that bed is our presence. It’s not the flowers or the cards that make a difference but our companionship, even for just a few moments.

A few years ago, my wife was hospitalized. The word “helpless” never seemed more real. I even considered going to medical school thinking that maybe I could be of help to her then. Instead, all I could really do was hold her hand, tell her how beautiful the hospital gown looked on her and wait.

Sometimes, the healing that we need doesn’t come from medicine, finances or a lucky break; it comes in the form of sharing something meaningful with someone else.

This upcoming year I want to refrain from setting personal goals and instead consider the simple pursuit to be available and present for others in my life.

The irony of this last sentence is that my wife is currently wondering why I’m still working on the blog and not spending time with her. Ouch!

I think that’s my cue to end this entry and begin practicing what I preach!

May 2012 be a year that we become more available and present to those around us.

3 thoughts on “The Perfect Game”