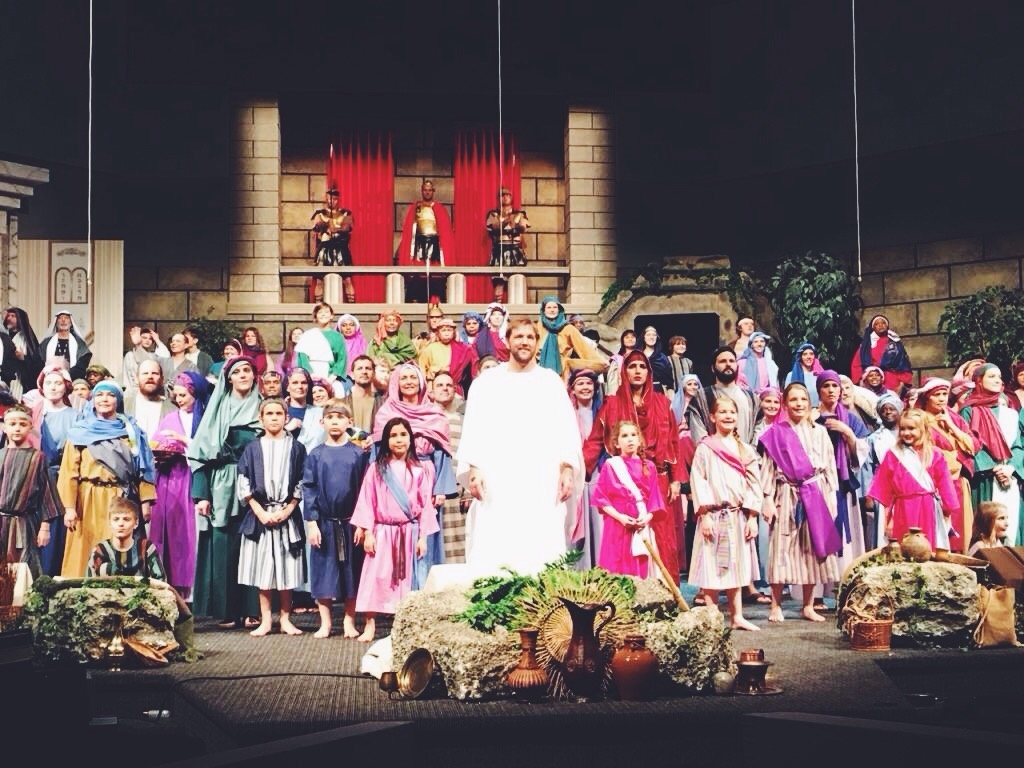 “27 And following Him was a large crowd of the people, and of women who were mourning and lamenting Him. 28 But Jesus turning to them said, “Daughters of Jerusalem, stop weeping for Me, but weep for yourselves and for your children.” Luke 23:27,28

I attended an Easter Passion Play at a local church because my niece was one of the cast members. She was so cute; beaming a huge smile and singing along to the songs. She even had a speaking part where Jesus asks her what her name is and she confidently says, “Karis!”

Aside from cheering for my niece, my mind and heart were captivated by the story that was unfolding. I had seen and heard this story told a million times. But there was something about seeing a dramatic portrayal of Jesus’ life, death, and resurrection that was deeply impacting.

We were nearing the part of the story when the High Priests were conspiring about how to get Jesus executed. The darkened lights and ominous music playing as background cued my other niece, sitting next to me, to say, “Jesus is going to die soon.”

The death of Jesus is something that we remember on Good Friday. The numerous memes and quotes that will inundate Facebook and other social media platforms during this Easter season is a small indicator of how significant the death of Jesus was to many.

Yet, when I saw the depiction of Jesus’ torture on stage, something disturbed me about it all.

All of the events leading up to his crucifixion demonstrates how a few people with a lot of power colluded together to orchestrate the death of an innocent man. When you examine closer the details of the corrupt court hearings, bribes, and political pandering, you realize how stacked the system was against letting an innocent man go free.  This was injustice at its ugliest. Religion and politics are dangerous allies. Who needs the devil when you’ve got Roman soldiers willing to carry out the hateful wishes of the clergy?

But it isn’t only those with power who are complicit in the assassination. Scripture speaks of a crowd yelling for a convicted thief to be spared in order for Jesus to be crucified. They wanted the innocent one to suffer and the guilty one to go free. Why are humans so easily swayed by lies? Thomas Merton says, “We are always asking, ‘What is truth?’ And then crucifying the truth that stands right before our eyes.”

Jesus was truth in flesh. Jesus was love in sandals. Jesus was hope with facial hair. His compassion for the hurting was fierce, tangible, and brimming with dignity. If he were fiction, you couldn’t write a more perfect character to fall in love with. Yet, even he could not escape the clutches of an oppressive system of hatred and violence. If Jesus can be victimized by the nails of religion and politics, what chance do we have of escaping our crucifixion?

It seems to me that we sometimes sensationalize and even fetishize the cross in such a way that we fail to see how ugly and horrendous it actually is. Imagine a necklace with an electric chair hung around your neck! “But he died for ME!” we say, as if somehow the violence perpetrated against Jesus is okay.

Brandi Miller writes, “We often discount the systemic injustice that killed Jesus with ‘will’ and ‘plan’ language. Injustice toward the innocent is never okay. We also avoid analyzing the system because it threatens our obsession with individualism that makes Jesus’ death all about us spiritually. Individual atonement narratives erase both the stories and suffering of the marginalized communities that the cross is meant to liberate.”

So, what if Jesus died for more than just our “sins”?

What if Jesus died so that we too would be willing to die for the “sinner”?

What if Jesus died so that we would be willing to offer forgiveness to those who despise us?

What if Jesus died so that we would not hold the sins of others over their heads?

What if Jesus died to show us that the way towards liberation isn’t held in the promise of weapons and violence?

What if Jesus died to show us how painful and sacrificial love truly is?

What if Jesus died to expose how brutal and oppressive systems of government and religion can be on even the most innocent?

What if Jesus died to end our need for revenge towards our enemies?

What if Jesus died for you so that you would lay your life for others?

As I mourn, my prayer is that God would do something miraculous in us and bring our lifeless limbs to action. I’m told the death of Christ isn’t the end of the story…