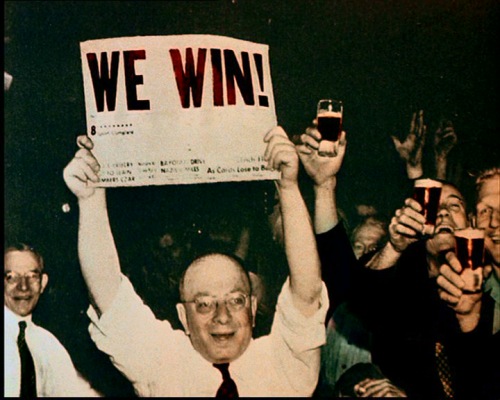 If I were standing behind a pulpit preaching today’s sermon, here is what I would say:

“I realize that today is a day of joy. I understand that we want to feel the emotional euphoria we get at a hockey game when our team is winning. Which I know is something really really rare when you’re an Oilers fan. I recognize that by Jesus rising from the dead we want to go crazy with our social media memes and inspiring quotes. We want to tell the rest of the world that we’re on the winning team because our guy just shot the winning score. I understand that we might even want to use our statements as a way to compel those on the “losing” team to join ours. Maybe if I add one more exclamation point they’ll know how RISEN!!!!!!!!! Jesus really is.

I don’t want to discourage you from doing this if that’s your jam. But, I want us to consider what happened on the actual day we are commemorating. Jesus broke the news about his resurrection to Mary Magdalene. This is the point of the sermon where I could tell you how much of a feminist Jesus was and how powerful he viewed women but I won’t because that’s a whole other sermon. Instead, I want to focus on the sporadic appearances he made. This is significant because, if you remember, before he was crucified Scripture says that Jesus spoke to “large crowds”. He was doing his speaking circuit: kissing babies, taking selfies, healing the sick, giving press conferences, serving hot lunches. Jesus was THE poster boy for Public Relations. (Move over Justin Trudeau.) But now, for some reason, he’s a little bit more hush hush about his appearances. I mean, this is the point where I would go all Trump and host the biggest rally you can imagine.

But Jesus does something different. In fact, we only have a few sentences in the gospel ascribed to what he does post-death. Which is weird, right? Wouldn’t this be the part of the story where Jesus gets his revenge on everyone who conspired against him?

The resurrection of Jesus is about something more satisfying than revenge; it’s about love.

You and I live with an anxiety to be liked, respected, and admired. But when things get taken away from us-our jobs; our relationships; our health; our security, we slowly begin to ask ourselves, “Who am I if I don’t have these things?” The resurrection answers that by saying, “You are alive and you are loved.”

In our attempts to prove our love to God, we’ll live by the rules and be really good Christians. But the Resurrection stops us on our tracks and declares, “You don’t have to prove anything to me.”

Every victim who has held onto to the promise that “vengeance belongs to God” sees in the resurrection that God’s vengeance is one of peace. Every criminal who’s perpetrated harm is confronted by a resurrected Jesus who whispers, “I forgive you. Your crimes don’t scare me.”

The Resurrection of Jesus is not a loud and brash declaration of, “I told you so!” It’s more like a strong quiet wind that bends our hearts towards loving those we find difficult to love. Even when sometimes, it’s us who we find most difficult to love.

The Resurrection is the reality of the impossible. It’s what makes dreamers dream and starry-eyed wonderers wonder. We are set free from our rational limitations of the “can’t do that!” or “it’s never been done!” to explore beyond the fringes of the familiar, orthodox, and predictable. The resurrection is what sets activists on fire with the justification that a better and just world is possible.

The Resurrection is the hammer that builds playgrounds and houses in war zones and garbage dumps.

The Resurrection is the coat hook you hang your ideology, theology, and prejudices on before sitting at the banqueting table with all our brothers and sisters.

The Resurrection is a small seed that becomes a profitable fair-trade coffee plantation.

The Resurrection is a pair of shoes that protect children’s feet from jiggers.

The Resurrection is the anthem that keeps the weak, imperfect, and gloriously flawed losers marching forward. I know because I’m still stumbling onward.

The Resurrection is the scent of burnt sage that permeates a room hours after a smudging ceremony.

The Resurrection is the lens that allows us to see indescribable beauty amidst the ugly wreckage.

The Resurrection is a one ounce shot of liquid courage you swallow back before confronting your monster.

The Resurrection is that small blade of green grass standing defiantly against a blanket of snow.

So, let us affirm that the Resurrection doesn’t need your applause or cheers for it to be heard or experienced. Let us instead surrender ourselves to this reckless heretical lavish love. Let us put our trust in this absurd conviction that death is now a comma and not a period. Let us be the fools who overflow with so much hope that the rest of the world wonders what exactly is in our water bottles.”