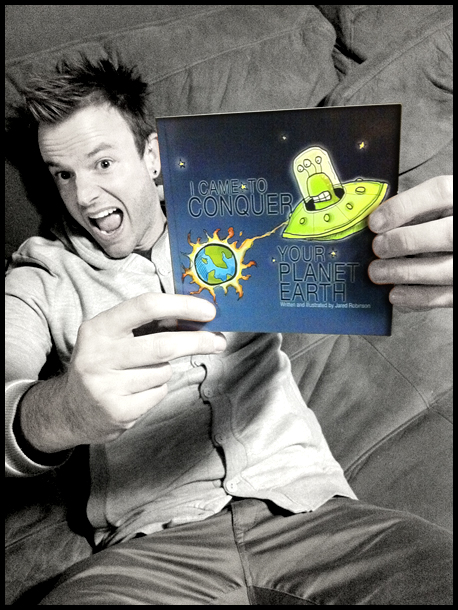 Delving into the deep recesses of our creative potential is something that can rarely be explained, let alone dissected. Instead, we are conduits of an idea. Victims of unrefined brilliance.  We stake no claim to the spark we’re chasing other than to say, “I’ve been lured by something and need to find out where it will lead me.” Some of us chase this spark through photography, music, fabric, binary code, words, concepts, ledger sheets, clay and a multitude of other mediums and materials. Jared is one of these pursuers. With a paint brush in one hand and camera on the other, he’s been chasing for years.

A few weeks ago, this Edmonton-based artist embarked on a side trail of sorts; he wrote and illustrated a book titled, “I Came To Conquer Your Planet Earth”.  It is currently on sale here. I suggest you buy it before it sells out. I’ve secured a copy for The Roommates even though I haven’t actually paid him for it. He’s that nice of a guy. (But don’t ask him about Coldplay, brazil nuts or Guy Fieri because he won’t have anything nice to say.)

1.  Without words you’ve been telling stories for years through your visual pieces. Why did you decide to write a children’s book? And why this story?
True story – With paintings, I have enjoyed creating pieces that could point the viewer in a certain direction, but leave much room for interpretation and thought. With this children’s book, it is more of just a whimsical story, with a very basic idea that love is better than hate. When my wife Melanie and I first started dating, about a month in, I sketched out this story for her. I took some blank computer paper, cut it up, and stapled a bunch of these sheets together. I took a pen and just started drawing a story for her from whatever came out of my head at the time – Improv story telling you might say. Mel saved this storybook, and 5 years later I decided to go all out and redraw each page professionally and publish it. 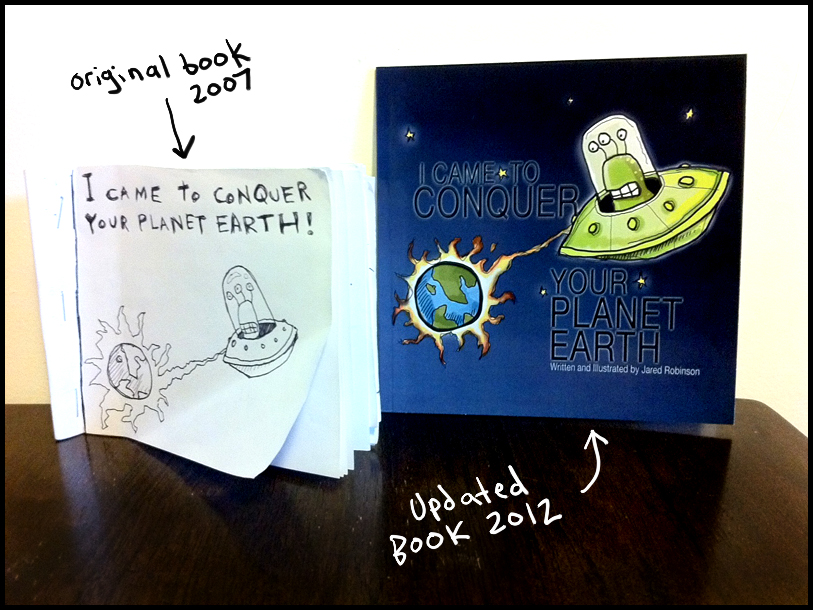 2.  I heard that this book is somewhat autobiographical so I’m left wondering how that’s possible when the plot centres around an alien who plans on destroying the world?

Yes. Quite autobiographical. I am from another planet myself, but I’m not here to kill, just to observe. I find Earth quite fascinating; Much to learn and discover. I urge everyone here not to take anything for granted. Things here are complex to say the least.

3. I recently had a small discussion with your wife on whether this book falls under the category of “children’s book” or “adult’s book”. I think it falls somewhere in the middle. What are your thoughts?

Yeah, I mean it has bold cartoons doing funny things so it could be considered a children’s book. It has kissing in it though, so it would depend on the adult if they want to share this with their children. It has a little humor and quirkiness that I think will be caught by both kids and adults alike. Much like most Disney and Pixar animations these days; it is made so both kids and adults can enjoy it.

4. If you had an opportunity to hang out with an alien for a day, what activities, places, people would you introduce it to?

If I could show another alien around this planet, I would probably introduce them to:

5. If you were abducted by an alien and you had an opportunity to bring 3 objects/organisms what would they be?

Fantastic question. If I was abducted by an alien, I would bring along: