This is my friend Tim Bratton. He lives in Vancouver, BC. He is an articulate and passionate guy.  When he’s not acting, completing his thesis, traveling or baking with his wife Amy; Tim can be found in a thrift store sifting through old LP’s. This is his playlist. I know you’ll like it a lot because I certainly did. 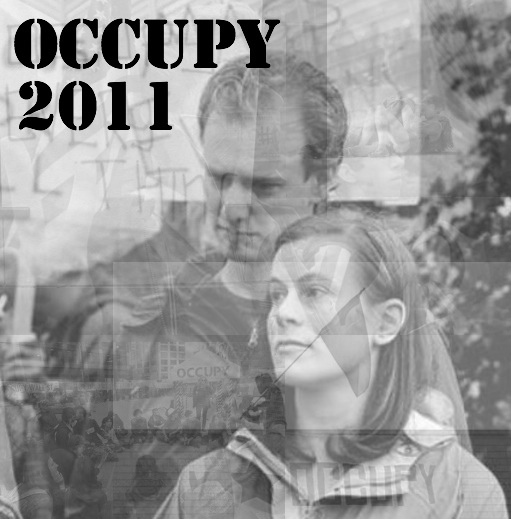 Amidst the hustle and bustle of the past year I often found myself empathizing with the Occupy Movement, sometimes in very tangible ways.  That Time Magazine chose to name “The Protester” as person of the year surely means that others too, from outside the protest, found resonance with the frustration (if not the messages) expressed by the Occupy Movement.  Of course what the media says today may be of little consequence tomorrow as GOP primary debates, Tebow mania, or the next season of American Idol swallows up the news of the Occupy Wall Street.  To quote Bob Dylan, “If I want to find out anything, I’m not going to read Time Magazine.”  Basically, if you truly want to know anything you have to be engaged with it.

That is the real point of any truly prophetic protest: not just being heard but engaging people in the creative work of transforming culture. It’s one thing to get others to listen to the truth, but getting governments, and corporations, and systems, and individuals to change in light of that truth is quite another. Change is hard.  And that’s why the core feeling one often has to come to terms with in fighting for change is the feeling of futility.

When we’re honest with our selves, we realize that for all that we do, for all that we say, for all our shared efforts, the changes we see in our world are usually quite small.  That’s not just a reality of the occupy movement, that’s a reality of life.  You have to give a lot for so little return.  The cheaper alternative, of course, is to do nothing.   Just bury our feelings, our hopes, out gifts and try to survive.  Then again, like the parable of the talents, in the long run we may discover that doing nothing actually comes at a much higher cost.

My mix this year is dedicated to everyone who has fought through their feelings of futility to make a meaningful change, however small, in the world around them.  May our songs and struggles, our protests and prayers, bear good fruit for the places we occupied in 2011.

Joy Formidable – Whirring | Because every protest needs a big dumb rock song.  Really, I’m just a sucker for the way too ridiculously huge guitar sound in this song.  Some people have informed me that this song got played to death on the radio, to which I say, “Stop listening to the radio.”

Chevelle – Face to the Floor | We all need a song we can raise our fists in the air for, and this one will do for 2011.  This appears to be a song of rage directed at the state of the world financial systems, and therefore totally appropriate to the mix.  For me though, this song was mostly a cathartic way to end a frustrating workday, always to be played at the upper limits of my car’s tiny stereo.

Charles Bradley – How Long | I know it sounds like it was recorded about forty years ago but this amazing piece of music is some of the latest work being put out by Daptone Records, a label dedicated to “delivering the new sound of old soul.” I have long been a fan of the music put out in the 60s by labels like Stax, Motown, and Chess, and this recording nails all the vintage vibe of those classic recordings including snappy vibrato guitar, a killer horn section and vocals that dig so deep you can feel it in you guts, “How Long” indeed.

The Black Keys – Sister | My brother-in-law actually fears listening to The Black Keyes in public lest he get caught strutting to the music; I mean how can you help it with a groove like that.  In my eyes The Black Keys can do little wrong, and this number had just the right amount of lament and tragedy to be a fit for this mix.

Ryan Adams – Lucky Now | For all the thousands of break up songs that have been written (I’ve written a few myself… haven’t you?) it’s still hard to beat Ryan Adams at the task.  Dare I say that this song strikes me as a tad more mature in its perspective than his previous work, or perhaps Mr. Adams is just more resigned to life’s realities?  It’s hard to tell some times if we are growing up or just getting older.

Iron & Wine – Me and Lazarus | Increased instrumentation and production values have not hurt the genius of Sam Beam’s song writing on this record.  Notes of frustration, poverty and – dare we say – hope of resurrection make this a great song and perfect for this years mix.

Sad, Beautiful, Modern Things – The Snowflake That Broke The Learner’s Back Admittedly a late entry to the race this song was made by a friend of mine, but I’ve always enjoyed and shamelessly plugged the music Steve Birss makes.  On this song (part of a short EP, available here) Steve joins with Curtis Hebert, and Mark Beattie to make more great “ambient experimental post rock.”

M83 – Midnight City | For some reason I feel guilty listening to this song.  I think it’s that I just don’t feel I’m cool enough to listen to this kind of thing.  Perhaps I need to drink more Pabst Blue Ribbon, or get tighter pants.  Guilty pleasure or not, there is nothing terribly profound here with M83, just an epic, hook-laden pop song.

Bon Iver – Holocene | This album was probably my most listened to purchase of 2011, and therefore the hardest one to pick a single track off of to include on the mix.  This song speaks to me of a wisdom and humility, both bitter and beautiful, that only comes with age; or is that just the sound of me coming to grips with being older.

Puscifer – Monsoons | I know that Maynard James Keenan would probably call me naïve or stupid for being a Christian (and if he knew my history working in churches, missions organizations and Bible schools he might have some more choice words for me).  But when I hear songs like this I feel that the Christianity that Maynard rages against has more to do with American culture and less to do with Christ.  That is to say, in Monsoons I feel that my understanding of true “religion” holds much in common with Maynard’s multifaceted notion of “spirituality.”  There is a sense of earthly life and hope in this song that resonates deeply with a truly Biblical notion of God’s love and care for all his creation.  As a heartfelt prayer for rain to come, and for life to rise from the dust and the dirt, this song makes perfect sense in my mix.

Braveyoung – How Each Friend Departed | Truth be told, I heard this album before its release, back in 2010.  Yeah, that’s right, it’s one of those “my friend knows the band and got a pre-release of the album” stories, but that doesn’t change the fact that everyone should have listened to this album in 2011.  Down-tempo and brooding, it’s the perfect late night contemplation music.

Seryn – Towering | I need to listen to this album more, and not just because ukulele and banjo music is awesome.  Seryn really does a good job of pulling together catchy and rhythmic instrumentation with thoughtful dynamics and great vocal harmonies.  Plus Jon Acuff of “Stuff Christians Like” is a fan too; Yeah, we’re an easy target market sometimes.

Girls – Forgiveness | There is a trend right now, occupying that thinly veiled space between art and advertising, which is all about wild appropriation of theological language for totally secular purposes.  Take the title of Girls latest album: “Father, Son, and Holy Ghost”. I mean, are you allowed to do that?  There is little theological language more deeply Christian than that which we use to refer to the triune God and you’re just going to call your album “Father, Son, and Holy Ghost” with no real concern for its centrality to a major world religion.  Isn’t that as ridiculous as if I, as a Christian, were to name my next EP “The Eightfold Path?”  Anyway, there’s this simple but lovely song about forgiveness on the album so… I guess I’ll let it slide, and come on, you’ve gotta love the great guitar solo.

Radiohead – Separator | I believe my friend once said something like “Radiohead could record an album of the whole band farting into a microphone and they would still sell millions of records.”  That may be true, and it’s probably because Radiohead farts would sound like frickin’ genius.  Whatever reason lies behind the undying love fans like myself have for Radiohead I can honestly say I thoroughly enjoy “The King of Limbs.” Not the intense or ambitious work of previous albums there is still enough brilliance behind these more mellow songs to keep me coming back.

“If you think this is over then you’re wrong”… More music and more protest awaits us in 2012.