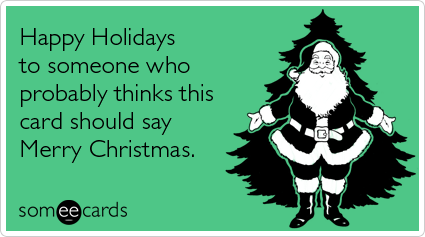 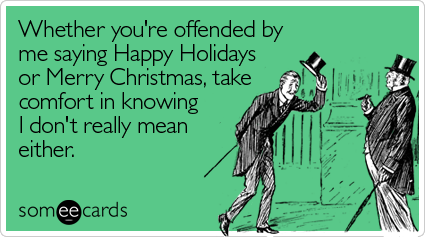 A few weeks ago I noticed on my newsfeed that a Facebook friend had commented on a letter written to the Edmonton Journal concerning the controversy behind the “Merry Christmas” vs “Happy Holidays” debate. The author of this letter was simply asking that we not change our tradition for the sake of those who are offended by the phrase “Merry Christmas”. She then provided an alternative to those “offended” by asking them to leave the country if this was such a problem.

There were many things bothersome about this letter. But perhaps what disheartened me  most was the amount of people who “liked” her post and the vitriolic banter in the comment section. In recent weeks I’ve seen more posts like this where we are compelled to feel indignant that Christmas is indeed being taken over by an ominous army of liberals, atheists, immigrants, Jews, Muslim, Rastafarians and Buddhists.

The sentiment is that this North American “holy day” is being trampled under the guise of “political correctness” and there is nothing  the legions of die-hards can do other than post arguments and rants on social media platforms.

Sadly, I see many Christians adding their voice to the fray in a way that I believe discredits the way of Jesus. For a moment I’d like to re-frame this debate in the following ways:

1. Let’s understand that North America was colonized by Christian “immigrants”. The indigenous people of this land were here first. They are the only ones that can claim the-“if you don’t like our tradition than leave our land” argument. Yet, it seems that after hundreds of years this fact has been forgotten and we assume that Canada was always only populated by Christian Euro-Anglos and until recently newcomers from other parts of the world suddenly started arriving.

2. Let’s recognize that Christmas is a pagan celebration dressed up to be “Christian”.

3. Let’s find an alternative way in how we talk (or not talk) about Christmas. Let’s be honest; when we say Christmas, the majority of people consider the buying of gifts as the centerpiece. That is the one common denominator among Christian and non-Christian celebrants of this holiday. The baking, mistletoe, Santa Claus, carols, mass, etc. are just the trimmings that are customizable to people’s traditions and values.  There is nothing wrong with these things. I’m just pointing out what we are actually “defending” when we say “Merry Christmas”.

Now, (we) Christians will get uptight about this because we are adamant that Christmas is about baby Jesus being born on a manger. We get offended that “Christ” is getting taken out of “Christmas”. We feel angry that our Saviour’s birth is defamed and reduced. Yet, what we forget is that the birth of Jesus occurred in a secluded area in Jerusalem with only a few in attendance. In fact, it was the outcasts (Shepherds) and “immigrants” (The Magi) who witnessed his arrival. In other words, God was less interested in making his birth a spectacle than he was about showing a selected audience the marvel and glory of this important occasion.

Here’s my point: we dilute the message of Jesus when we attempt to fight for the right for his name to be attached to a pagan holiday where consumerism is at the very heart. As a Christian, I don’t need Starbucks, Wal-Mart or Best Buy to proclaim the name of Christ. It is my call and responsibility to live as Christ would through my actions and words. I am (we are) the billboard meant to carry the name of Jesus. For that reason, I don’t care what greeting you use during the month of December. Perhaps, we need to be okay that Christmas is returning to its true pagan roots. Maybe, we need to confront our sense of entitlement and surrender our “right” to have Jesus acknowledged by society. (He’s the reason for the season!)

Cause maybe then we’ll move towards things that truly matter like: doing justice, loving mercy and walking humbly with our God. As one Facebook friend aptly posted:

“You may prefer Merry Christmas to Happy Holidays. Great. But please be gracious in expressing it. Turning word preferences into a battle of who can express more indignation is not really honouring the one who arrived under the proclamation of ‘peace on earth.'”