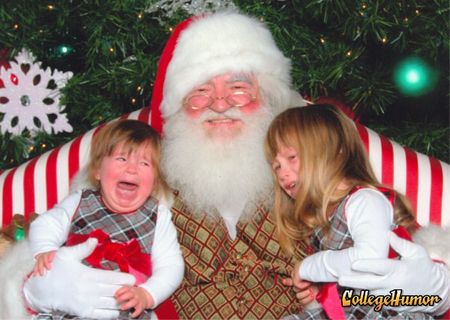 Let me begin by talking about Santa Claus. If you’re like my Dad, you only mention Santa Claus to point out that Santa is an anagram for S-A-T-A-N. Over the years, I’ve seen people battle this mythical over-weight jolly old-timer by attempting to convince the world that Santa is evil. I’ve read from well-meaning Christians that Santa distracts us from the “true meaning of Christmas”.

Despite the various viewpoints that people have, I want to attempt to deconstruct the Santa mythology in order to uncover something fundamental about the gospel of Jesus.

In order to do that I’d like to begin by looking at some of the bad press Santa gets.

At an early age we are told to write a letter to Santa instructing him in great detail all the toys we’d like for Christmas. The letter eventually turns into this long wish list. At an early age we learn how great it feels to get stuff wrapped in cheap paper. You can call it our introduction to materialism. Of course, there are exceptions to this where you have Saintly children who ask for world peace and for grandma to get better. But let’s be honest, the majority of us asked for  Barbie’s, Transformers, GI Joes, My Little Pony, etc.

Santa determines what you get based on how good or bad you are.

Again, at an early age we learn something destructive about “earning approval”. It’s not enough that we have our parents, friends and teachers to approve of us, but now we also have to consider that an invisible all-seeing old man is watching our every move and determining if we’re naughty or nice. (Can someone say “creepy?”) Our distorted view of God can sometimes be traced to Santa’s methodology of dispensing gifts. Some of us still think that God is a cosmic divine Santa in the sky determining if you are good enough to receive his blessings.

You can go into any mall in North America and see men dressed in a red velvet suit sporting a fluffy (real) white beard. Many parents will line up for a long time and pay for a picture of their child crying as they sit on this costumed stranger. It’s amazing! For many, the experience of Christmas is deeply enmeshed with the mythology of Santa. Yet, if you had a nativity scene with Joseph, Mary, Baby Jesus and little cute farm animals, in the mall, you might be asking for trouble. The edging out of Baby Jesus has caused many Christians to push for Jesus back into the spotlight. Many of them look at Santa and blame him for crashing Baby Jesus birthday party.

Now, I don’t know where you stand on the role that Santa plays in your Christmas experience and I don’t want to cast any judgment. But, if we’re honest, we’ll admit that despite all the bad press, Santa ultimately is best known for his generosity.

He is a cultural icon that is known for giving to the most vulnerable of society.

So where does his story stem from?

If these origins are true, then there is something profound about the story of Santa that we have completely overlooked. Instead of looking at Santa as a corporate mascot that encourages us to “buy more stuff” or as the enemy of Jesus, we might want to consider an alternative perspective. Perhaps one worth striving after.

I want to frame our conversation, with the story of St. Nick as our template, by asking 3 questions:

What is our motive for giving?

How do we give?

Who do we give to?

Let’s talk about motive for a moment. I believe this is the most important question to ask because how we answer this one will determine how we answer the other two. If you’re like me, I tend to give out of guilt, pride and self-gain. When I give out of guilt it always feels a little dirty. It’s as if I give just to shut-up the voice in my head that says, “You are a horrible human for not helping. You should be giving and doing more for others. You selfish pathetic man.” When pride is my motive I make sure to help just enough to get noticed but not enough that it’ll cost me much. When self-gain is my motive I’m always asking the question, “Yeah, but what’s in it for me?”.

Now, the only thing in this universe that I think helps change my motive to something more exemplary (and less shameful) is to look at the grace God has shown me. In other words, I acknowledge that I’m like St. Nicholas in that I’ve inherited a crazy amount of wealth from my Dad. All the blessings I have are a gift from God. They are given to me with no strings attached. Therefore, when I stop to realize everything that I’ve been given, (health, home, love, joy, salvation, family, Simon’s gift card) it overwhelms me with gratitude. That gratitude doesn’t always remain as an emotion, but sometimes it moves me to want to share what I’ve been given. The more I take inventory of what I have and less on what I don’t; my heart bursts with the desire to see others blessed. That changes everything.

Once we understand the motive behind our giving we can then attempt to answer the next 2 questions:

How do we give?

Who do we give to?

If we asked St. Nicholas these questions, he might answer, “you give anonymously and you give to those in need.”

These words actually echo what Jesus once said:

So how do we give?

We give in the posture of humility.

Anonymity is a powerful way to silence the pride within us that desires so badly to be acknowledged. It short-circuits pride and self-gain almost instantly!

Giving in anonymity can be done in a myriad of ways. Some of you have discovered the power of this discipline and know the beauty of what God does when our names are left out of the spotlight. I’ve been the middleman of many schemes like this from people who desire to give something to someone without getting any form of recognition. I’m always left inspired and brimming with hope that humanity isn’t all that bad!

The posture of humility helps us recognize that we are just as needy as those who we give to. To give in humility restores the dignity and humanity of those who are in need. It connects us. It erases the superficial boundaries that separate us.

The other day I talked with someone who for a long time relied on the giving of others to make ends meet. Now, having come across a consistent source of income beamed when he told me all the things he bought for himself and for others. It was as if he felt fully alive from his newfound ability to share his wealth. I think one of the things that “charity” robs from those we give to, is the truth that they too have something to give. When we give in humility we affirm the gift and potential they offer the world.

So who do we give to?

Here’s a comprehensive and beautiful answer to this question…

At the end of the day there’s a reason why Santa is always jolly despite the immense pressure of having to deliver toys to 22 million kids an hour on Christmas eve while avoiding being detected and shot down by the North America Aerospace Defense Command.

Maybe, he knows something about grace that we don’t.