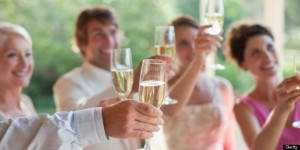 Wedding season is upon us and odds are, you have a better chance of giving a speech at a reception than finding “the One”. That’s not to say that “the One” is out there bingeing on Gilmore Girls at the exact same time that you are. (Based on Netflix’s algorithms, the chances of that happening are actually really high.) But let’s assume that you are grateful for being single and you’ve realized life is more productive when you’re Ubering through the highways of your existence rather than listening to “Let it Go” play from the mini Van’s DVD player for the thirteen-hundredth time. So, with optimism and humility you agree to giving a speech. (As if you really had a choice. Unbeknownst to you, your friend spotted you in Drama class deliver lines from “Fiddler on the Roof”with such confidence that you were locked in for the gig long before you wore matching Milli Vanelli t-shirts.)

Your biggest fear at this point isn’t the delivery of the speech, which you will hardly be judged on because you’ll already be more charismatic than the Reverend officiating the wedding. No, your fear is that the content of your words will seem too sentimental. What makes you sick to your stomach is knowing that you will not mean anything of what you will say. Sure, you’ll feign a tear and get choked up at the story of the time both of you almost died in a car accident. That will be the crescendo of your speech because by this time, there will not be a dry-eye in the room. Everyone gets emotional about near-death experiences. You know that. That’s why you slipped it near the end of your speech.

You know it doesn’t matter what you say at the beginning, it’s what you say at the end that everyone remembers. You’ll try to lie to yourself that these are heartfelt words, but you know it’s bullshit. You resent that you are an item on your friend’s To-Do list. Next to “Book DJ” and “Rent chocolate fountain” you are a task predetermined to be checked-off since the first day of your friendship. But this won’t stop you from taking advantage of the open bar or the buffet. What you feel in misery you’ll make up for in indulgence. My one advice, if you’ll take it, is that when you raise your glass, raise it high enough that people’s focus is on the sparkle of the champagne and not the doom in your eyes. People go to weddings to escape reality. So, don’t ruin it by letting your real emotions show.

2 thoughts on “A Bright Shiny Toast”