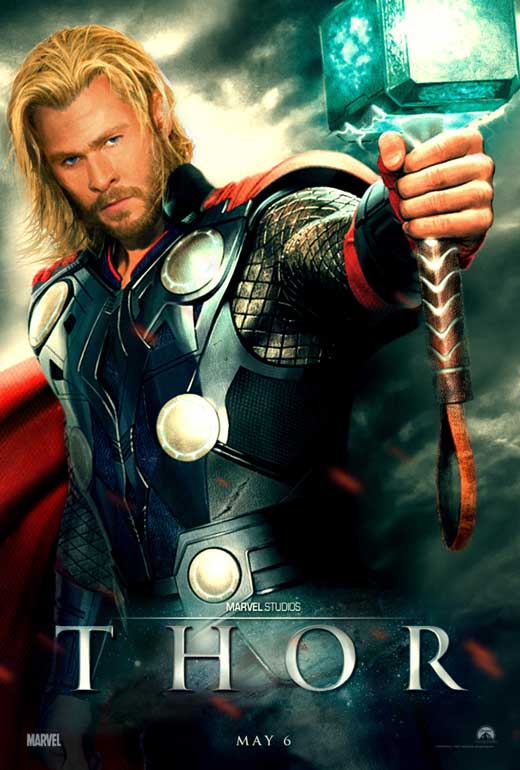 At my youngest brothers’ suggestion we should have arrived 2 hours before the movie started. If we had listend to him we wouldn’t of sat in the front row. Which is always an undesirable place to sit for any action-packed feature. But even more so (as I discovered) when it’s in 3D. Because of this disadvantageous perspective my thoughts on the film could be a bit imbalanced. Did I mention that I get headaches from 3D glasses?

If I were to describe the film using hyphens I would say, it’s a quasi-Lord-Of-The-Rings-meets-Superman II-meets-Kate-And-Leopold. It’s mythological but also doesn’t take itself too serious. There are moments of “epicness” and levity that balances the incongruence of a Norse deity among our  modern world.  I found myself drawn more to the scenes in Asgard because of its “Lothlórien” vibe. Not to mention that the Ice Giants are pretty cool to look at (!)

A strength of the film is it’s ability to poke fun at the genre it represents. A point of hilarity is when a S.H.I.E.L.D officer describes Thor’s friends as “Xena and Jackie Chan”. There is room to breathe and enjoy the ridiculousness of it all like the Iron Man franchise but without sarcficing the integrity of the super-hero myth. Chris Hemsworth (Thor) is perfect. He is brash, quirky and believable. His forearms are massive. I’m not joking. They are like the pillars of the Pantheon. Natalie Portman (Jane Foster) is alright. There isn’t a lot of room for her to be the swan that she is. It’s a generic role that she can pull of in her sleep. Don’t get me wrong. I’m so glad it was her. Speaking of actors making money in their sleep; Anthony Hopkins (Odin) is a welcome presence to the screen. He brings his usual arsenal of intense glances, precisely delivered lines and mystery that is both reassuring and terrifying. I didn’t realize that Kenneth Branagh directed Thor. Yes, that Kenneth Branagh. The talented thespian who is known for Henry V, Hamlet and…. Wild Wild West.  Dr. Arliss Loveless? Really? Branagh’s brilliance in this film is that he definitely adds a touch of Shakespearan flourishes that manages to pull the collision of two worlds without seeming hokey.

In all, the film was satisfying. It has all the elements we want for this genre. It’s a refreshing take from a familiar fountain.  However I will leave you with 2 warnings. 1. Arrive early because you do not want to sit in the front row. My neck got a good work out as it moved from left to right whenever the hammer was thrown. (It gets thrown a lot) 2. Don’t stick around for the scene that happens after the credits. Very disappointing. One heckler in the theatre had the courage to yell “I don’t get it!”. Which is exactly what everyone in that room was thinking.