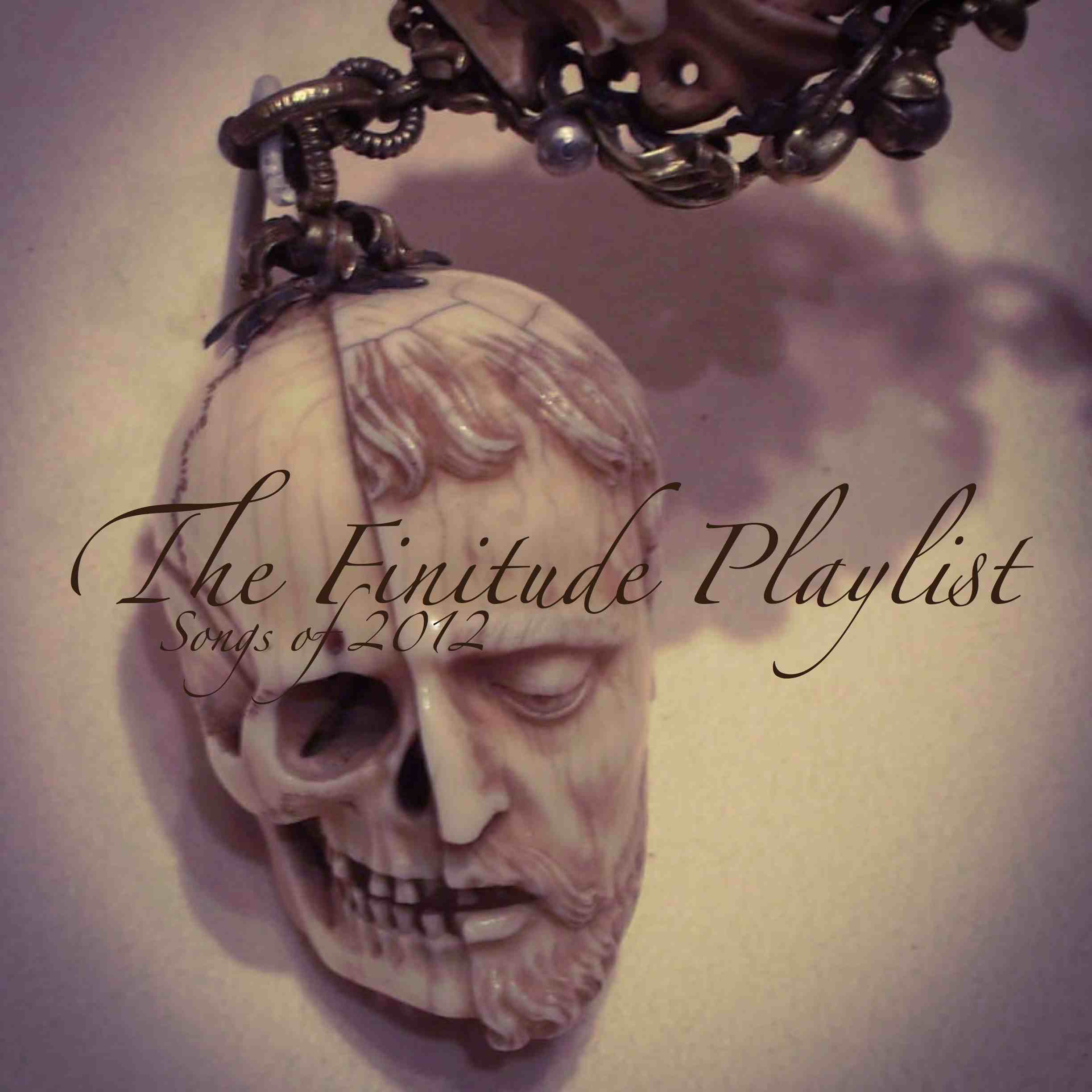 2012 was a year of awakening to my great finitude, that is to say I felt the limits of my abilities and capacities as a human being more acutely than ever before. Some of this feeling no doubt came from a hard push to complete my Master’s Degree and the exhaustion that beset me once I handed in my final papers (over a year ago now), but it goes deeper than that. I have tried in so many ways to be and do more than my mind, body, and spirit will allow. In reaching the edge of my capabilities I have been humbled, even as I celebrate the accomplishments of my recent effort.

A Memento Mori is an artistic expression that reminds us of our ultimate finitude – the inevitability of death – and my playlist for 2012 is an expression of this sort, a reminder that we must accept the grace of our limited existence. My apologies for the year long delay in releasing this mix, consider it another reminder of our limited human capacities, and as you listen to these songs receive the words that begin the Lenten season:

This song is about unrestrained greed and ambition, the impression is of the kind of selfish and self-made made man that Leonardo DiCaprio seems so apt to play in recent movies; I guess you “Gotta wreck it ‘till you fall.” Normally a group that tours with the likes of Katy Perry is not even going to make it on my radar never mind my list of top songs, but somehow I stumbled upon this tune and got sucked in by the awesome horn section.

School of Seven Bells – “The Night”

In 2012 I discovered the wonders of Songza, and in turn discovered the music of School of Seven Bells. This song points us to the way in which the rupture of a romantic relationship is always a tangible loss from oneself, a reminder that we never walk away from love unaffected.

I first encountered Damien Jurado back in the glory days of Tooth & Nail and while not a devoted fan I’ve always been intrigued by his song writing and so I check in occasionally to see what he’s up to. Continuing on the theme of love lost, Mr. Jurado taps into the mysterious nature of love’s lessons; perhaps “one day we will go home to the safety of our clouds,” but for now, “it’s not that easy.”

Rounding off a trio of break-up songs with this tune from The Milk Carton Kids.  Simple and powerful guitar and vocals, it is the inevitable question at the end of any break-up, “what am I supposed to do now, without you?”

Admittedly I’m sneaking this track in as a late edition to the list; It was released in 2012 but I didn’t hear it until 2013. This semi-autobiographical song explores the challenges of trying to make it as a musician; remember “It ain’t what you got, it’s what you make.”

When you hear singer Brittany Howard launch into this song it’s hard to believe she’s so young, and comparisons to Janis Joplin are certainly apt. What can be said about this song that it doesn’t say all on it’s own, “you gotta hooooooold on!”

The Mynabirds – “Body of Work”

Borrowing from Jean Paul Sartre, lead singer Laura Burhenn sings “Freedom is what you do with what’s been done to you.” It’s a succinct way of reminding us that our freedom is contingent upon the freedom of others; even as we make our own way in the world none of us is self-made.

Grimes first caught my attention in 2011 with the release of the Darkbloom EP, and her 2012 full length album is so haunting and macabre it fully won me over to Claire Boucher’s unique voice. It’s hard to put my finger on it, but this song continues to draw me in with its strange yearning.

I don’t know exactly what you get when you let an Estonian born electronic band re-mix an Indiana born folk singer, but in this case I like it. Perhaps a bit overly triumphalist in it’s lyrical outlook, at least it’s better than the not-so-ironic defeatism that indie folk can sometimes fall into; then again, perhaps I just like the driving beat.

Yet again we enter the realm of love and risk, feeling the blessing and the curse of being stuck with the one you love. I know that Grizzly Bear have been indie darlings for a while now, but they didn’t really catch my attention until the release of this album.

Remember our character from track one, only instead of the hollywood gloss provided by a stellar horn section the fuzzed out guitar of Tame Impala is here to remind you that whatever this guy thinks of himself, in the end he’s just an asshole.

Vintage Trouble – “Blues Hand Me Down”

It’s always good to discover a band that can carry on the Blues tradition without being a boring derivative or sounding played out. Vintage Trouble helps remind us that we are all inheritors of tradition, for better and for worse. What has come of our hand me downs? “Lord, have mercy on my soul, I didn’t know, you never know.”

John K. Sampson – “When I Write My Master’s Thesis”

This song may not be for everyone, but it came at just the right time for me as my own Master’s work drew to a close. I guess it’s hard to understand the epic crescendo on the “No more citing sources!” unless you’ve been there.

Ordinary Neighbors – “Here We Go” *Not available on Grooveshark playlist

I had the pleasure of becoming friends with Joshua Banner a couple of years ago and am glad to include this track from a project featuring the fine work of him and his talented poet of a wife, Susanna Childress. Listen to the whole album and you may also recognize the touches of DM Stith (who recently toured with Sufjan Stevens) and some other notable musicians like Dustin Ragland.  What will come next now that my graduate studies are over? I’m not sure, but “Here we go.”

Listen to interviews with Natasha Khan and you will find out that the inspiration for this song’s refrain came from a 1970’s film called “Ryan’s Daughter,” but, intentional or not, there is a deeply Biblical allusion here as well.  In the sermon on the mount Jesus asks his listeners to “consider the lilies of the field,” and this song seems to be a similar admonition to step away from our striving and accept the grace of our existence, perhaps even “Thank God I’m Alive.”

Sola-Mi – “The Blessing of Being Bloodless”

It was great to finally see Derek Webb at a concert in 2012, and while I enjoyed the solo show it was his collaboration in the Sola-Mi project that stood out for me.  Is it really a blessing to be without limits, without a body?  Building off the previous track of the sa,e album we continue to discover that the Nexus of all this music may actually be our fragile bodies.

Death is the great marker of our finitude.  In the absence of God death is in fact the only great absolute (as the French Existentialists were so apt to remind us).  What then does it mean to accept death, is it really okay to say goodbye? Whatever lies beyond the edges of our life of flesh and stone and dirt, “Fall into that mystery or it will pull you under.”

I was really pleased that Karla Adolphe made such a great album for 2012.  This was a stand out track, but I thoroughly enjoyed the whole of Honeycomb Tombs. A fitting finish to the mix: “Growing gardens out of my wounds, I know I’m alive.”