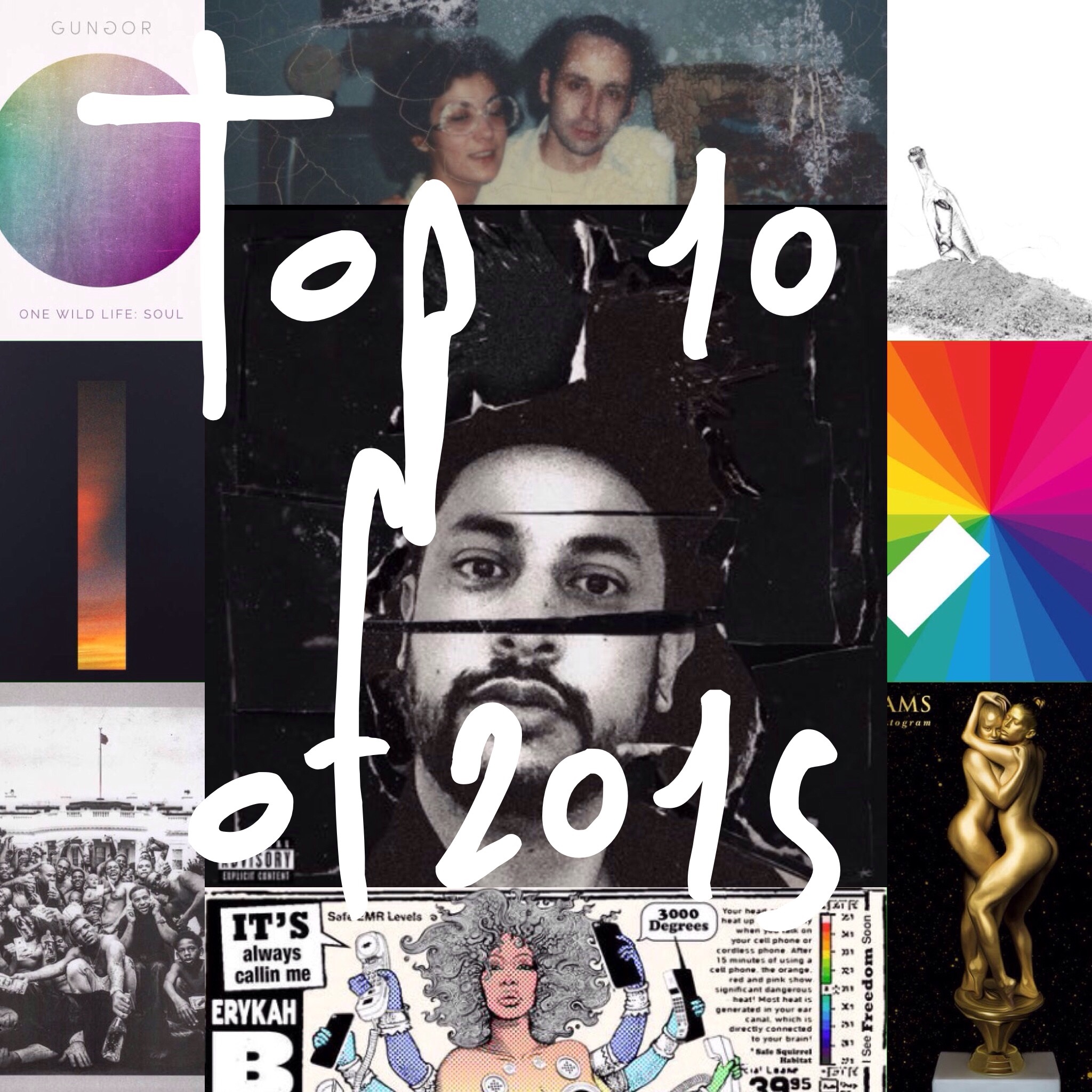 Show me your music playlist and I’ll tell you everything about your life. Well, not exactly. But if my favourite albums of 2015 are any indicators of the type of year I had, it wouldn’t be off target. I decided to go with entire albums rather than songs this year because so many of the albums I loved had me from beginning to end. Before I talk about the artists on my list, I should mention some of the artists who didn’t make it to the final 10. I was delighted by Zerbin’s Darling and soothed by Raury’s All We Need opus. There was even a spot (gasp!) for Justin Bieber’s Purpose in my heart this year. (Did I just type that?) Bomba Estereo almost made it with their wonderful Amanecer album but failed to clinch a spot. Anyways, without further adieu, here is my list:

10. Erykah Badu | But You Caint Use My Phone (Mixtape)

This album slipped into the number 10 spot at the last minute. I had an infatuation with Drake’s Hot Line Bling long before it became unbearably popular. Therefore, my disconnection from Drake had me dialing into Erykah’s version of the song and before I knew it I had the entire album cord curled around my head determined to not hang up first.

My friend Liz posted on Instagram a picture of this album and I queried if it was good. She said, and I quote, “I can confidently say you will dig it.” She was right. Big Boi and Phantogram perfected what Danny Brown had started with Purity Ring; the pairing of two contrasting worlds into one melodic and interesting sound. It’s like dipping your bread into olive oil and balsamic vinegar; you know they don’t mix but once in your mouth you don’t care because it tastes so damn good!

So much is accomplished on such a short album. The song Long Distance is easily one of my top 3 tracks of 2015. Blare it loud and escape the mundane of your day. I do it all the time. Loading the dishwasher, clearing the snow, picking up toys and this song starts playing and I’m all like

7. The Weeknd | Beauty Behind The Madness

If you’ve just tuned into The Weeknd, you’re not alone. It might seem like he came out of nowhere with this larger-than-life album about sordid relationships, drugs, and the angst of a lavish lifestyle. But, if you first heard him four years ago on his House of Balloons you’re not really surprised by his content matter or sound. Having said that, this album is a lot more approachable without sacrificing on the mystery and despairing feel that we have been accustomed to.

Everything Brittany Howard sings is believable. When she sings, “I don’t want to fight anymore” I feel it in the depth  of my heart that understands the weariness and anger that builds up in relationships. I may or may not have sent a link of this song to my wife during one of our “disagreements”. The entire album is visceral and felt deeply. The piques and valleys have a sound and colour that I’m happy to have Alabama Shakes fill in for me.

Michael and Lisa Gungor have put to song a lot of where my soul and heart have landed. I don’t have patience for a lot of the “religious” songs that portray a saccharine and one-dimensional existence that’s divorced from reality. Listening to this album is like being inside a dull-coloured, fake plant infested, windowless church building and then someone cracks a hole into a wall and you stick your head out to breathe in the fresh air of a terribly beautiful and wild world. It filled my lungs with hope that I haven’t had in a while.

4. Kendrick Lamar | To Pimp A Butterfly

This is not the album you play at a party to get the crowd hyped. It’s also not the album you play to calm your nerves. It’s an album of protest unlike what we’ve heard in a while. If you’ve listened to it and felt it was “too jazzy” or “too political”, you’re only skimming the top of what he’s trying to achieve. Mass appeal at the expense of content is something Kendrick is not going to bargain with. Remembering the voices of the #BlackLivesMatter movement is to hear the cries of injustice and anger of people who feel helpless but hopeful. This album is that flicker of light declaring the complexity of it all: “I’m the biggest hypocrite of 2015\When I finish this if you listenin’ sure you will agree\This plot is bigger than me, it’s generational hatred/It’s genocism, it’s grimy, little justification”

This is the follow-up album many of us have been waiting for. Not since Seven Swans, Michigan, and Illinois have we sat so close and personal to Sufjan’s life. Back then we got glimpses of his upbringing but this time we are front and centre of what feels like his personal journal. I’ve listened to this album countless times and while it sounds beautiful it carries a weight of tragedy and loss. You feel it in a way similar to when a friend shares something intimate that occurred years ago. They are much braver and stronger than they were years ago so they’re able to tell you without fear of being felt sorry for.

Underneath all the horns and myriad of artists who lend their voices lies Chance the Rapper. Unlike rappers who make their name known, Chance is happy being underneath it all as the maven connecting sounds and lyrics like a true artist. This album is buoyant, happy, energetic without taking itself too serious. It was constantly on replay because I liked how I felt when I listened to it. I like how genuine and unpretentious it sounds. I also find Chance compelling as an artist and person who not only shares the limelight but also revels in it.

Without question, this was the album I listened to the most in 2015. It is a cornucopia of sounds, melodies, beats, and emotions. It didn’t matter if I wanted a banger or a mellow track or something to lose myself to; In Colour provided everything I needed and more. I don’t want to say more as to not keep you from downloading this album immediately.

You can listen to my mix on Spotify here: spotify:user:ordinarystrange:playlist:21PDLzZfSJeN74vDDLOY4Z