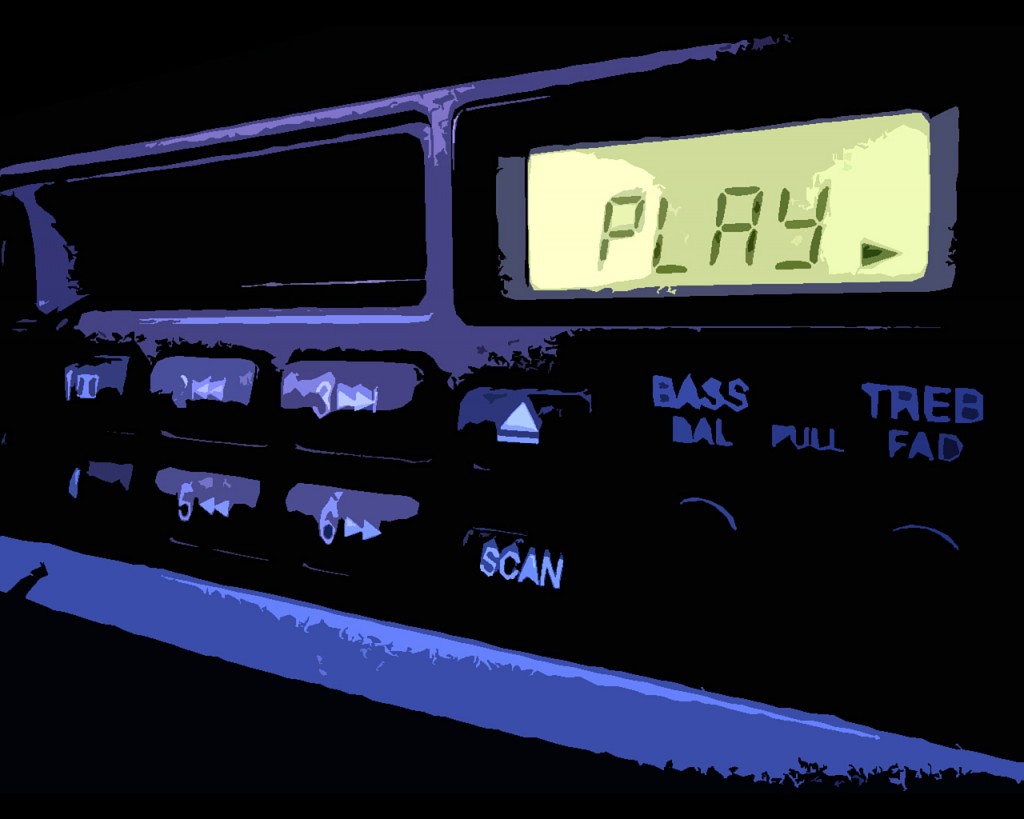 My car stereo taught me something. True story.

I drive a zesty 2004 Suzuki Swift. He is endearingly called “Tonka”. The moniker comes from its “sturdy but toy-like” appearance. He’s been very good to me over the years. Like a family pet, he’s been the loyal constant who’s travelled with me through the concrete streets of  life’s ups and downs.  I was in my early twenties when we met. I still remember arriving at the Calgary dealership and knowing that I wanted “him”. Without much haggling I left the lot with the exuberance of a young man that just tricked a girl into a date.(Or maybe the other way around?). Call me young and dumb but I didn’t care that he came WITHOUT a car manual. The sales person said it would be mailed to me. It never came. I didn’t care. The zip and roar of the 4-cylinder engine was enough for me.

All these years I’ve been driving Tonka without really knowing the intimate details of his body.  Locked inside that manual were his secrets. One of the those secrets would be the explanation of a mysterious magnetic-striped card that contained some numbers on it. All these years I’ve wondered what its purpose was.

A few weeks ago we forgot to close the passenger side door. Meaning that Tonka’s interior light remained on the entire night. If you’ve ever done this you know that this drains the car battery, which, on a cold winter morning, translates to the failure of the engine to turn ON when you’re rushing for church that particular morning. Thankfully, we  happen to live near a Knight in shining armor who with the help of his voluptuous Sienna steed, saved the day and got us to our destination.

A few hours later another Knight helped bring Tonka to life again. I don’t know how it all happened but somehow through the magic of cables, fairy dust and a fully functioning car; Tonka was resurrected!

My heart was relieved. Tonka was back to his normal peppy self again. Except for one monstrous detail: the car stereo refused to function. To be more specific, the stereo display required a special code to be inputed in order to work again. I frantically tried “1234” and then “4321” to no avail. I then did some preliminary research to see how I could attain this code. Apparently, that mysterious card with the numbers was the missing piece to this puzzle. I had no clue where it was. Hoping to find a short cut I searched online. No luck. If I didn’t find that card I would have to take it to the dealership to get the stereo security reset. This was a hassle I wanted to avoid. After taking apart the house and failing to find the stupid card I still refused to take Tonka to the dealership. Instead, for almost 3 weeks we drove Tonka “music-free”. It was like stepping into an MRI machine where it’s just you, metal and the foreboding silence of your own thoughts. Eerie.

One day, I was waiting for my wife in the car as she completed an errand when something inside me snapped. With fury I decided I would take the duration of my wait time to press all the number combinations I could think off. At first I was systematic. 1111.2222.3333. NOTHING. Then I changed up my game.1222, 1223, 1224. FAIL. In desperation I decided to give up my strategy and try something random and pointless. I chose to put my mitt on and slide my fingers across the buttons. Seriously. This is what I had descended to. In my SECOND attempt the heavens opened. I unlocked the code. I kid you not. I was in utter shock. With bewilderment slowly melting I turned up the volume and played the CD that was stuck in the player. The song “Infinity Guitars” never sounded so glorious. In disbelief I sat in my car and became a student to what my car stereo had just taught me.

At the moment when you’ve tried every possible combination to attain your goal, perhaps, the next best option isn’t to try another angle, but to surrender. We seldom see is this as an option. We’d rather “keep grinding our wheels” in order to feel like we’re “doing” something. Giving up  implies:

But maybe those things are the raw materials required to fuel another possibility. One you hadn’t considered before. In the world of addiction recovery, the very first step is to “Admit we are powerless over [insert your addiction]- and that our lives have become unmanageable.” In other words, we must take the arduous journey of confessing our inability to manage/control/strive/manipulate/rationalize our problems. Or in my case: “STOP PUNCHING IN THOSE STUPID NUMBERS! DO YOU HAVE ANY IDEA HOW MANY COMBINATIONS OF NUMBERS IT WILL TAKE TO UNLOCK THE CODE?!”

Maybe you’re in a battle at the moment. It’s you VS

After trying all the possible mutations to conquer/achieve/move on, the display on your dashboard still blinks “wrong code”.  Maybe, that’s the sign you need to finally give up. What does that look like? I don’t know. Maybe it means to allow the fragments of my decisions to catch up with me. Instead of preventing further chaos to develop, it could mean for me to let the mess just happen. Perhaps when I “hit rock bottom” I’ll have a better understanding of what I need to get back up. It’s only when I’m at the place of utter desolation and depravity that I understand more deeply my need and trust for a “Power greater then myself”.

I’m reminded of the lyrics of a Frou Frou song:

So, let go, let go
Jump in
Oh well, what you waiting for?
It’s all right
‘Cause there’s beauty in the breakdown

Who knows what will happen when we give up control. Maybe, like me, you’ll witness a miracle inside a small compact car.

ps- here are new playlists for you to enjoy.

2 thoughts on “Maybe this will work…”