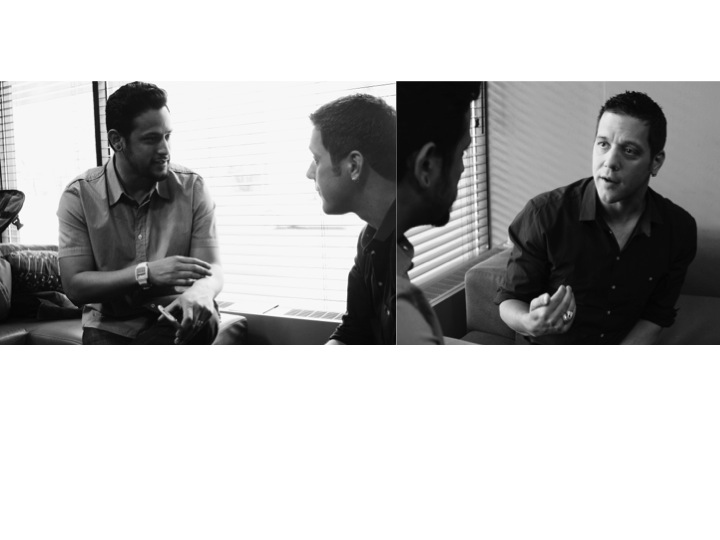 Below are excerpts of the interview I had with George Stroumboulopoulos at Hotel Arts in Calgary on May 15, 2012 as part of CBC’s Media Preview for their upcoming season on behalf of Georgie Magazine. You can read the published article here.

ARE THERE ANY GUESTS, WHETHER GOOD OR BAD, THAT CAUGHT YOU BY SURPRISE?

AS A FAN, HOW DO YOU RESPOND TO GUESTS LIKE THAT?

Which is awesome, because I’m a guy, a regular person, so I’m just like, sitting there, “Oh man! I like this guy! This guy is pretty dope!” You know? Sam Jackson, really cool. Bill Duke, really cool. Mia Farrow, so cool. And you expect them to be good, but you just, you hope that they’re going to open up and give you some of the real side. Because the one thing that sucks about interviews is that if you get people who are on an interview wheel, a junket, and their just spewing messaging. “Messaging, messaging, messaging”. Because what you miss is humanity. Humanity is actually what makes this thing count. It’s what makes it work. And what is the point, if you just talk about “message points”. You’re disrespecting the audience and you’re making it “one way”. When you’re actually a human being, it becomes two-way. You become vulnerable, you can’t control stuff. Which is what a good conversation should be. Right? Sometimes a guest is really guarded, but those dudes, had their guard up to a degree, which is natural, but they weren’t afraid to play, they weren’t afraid to engage. That’s what I want. I want grown-ups who want to have grown-up talks.

HOW DO YOU PREPARE YOUR QUESTIONS? IT SEEMS SOMETIMES THAT IT’S MORE NATURAL THAN PREPARED…

Yeah, yeah. We’re fearless. I would say we border on reckless. (Right?) I have an idea. I know who the person is, I’ve done the research. I have an idea of some of the things I want to talk to them about. Every now and then I have in my head or the producers want to ask them this question or that question, this is what I want to ask them, etc. But when the interview starts, right? Whatever.

WHAT WOULD YOU SAY IS THE MANDATE OF YOUR SHOW ? SPECIFICALLY WHEN IT COMES TO CANADA…

We should be fighting them. We fight them. But we also go, “Hey, here’s a really cool band. You should hear them.” (chuckles)

YET, THERE IS ALSO A RESPECT YOU HAVE TOWARDS THE PEOPLE YOU DON’T AGREE WITH…

Yeah, because I’m a human being that’s complex. I’m a complex person with a myriad of interests and I love people, for the most part, and I like ideas and I don’t have all the answers. Man, I want to learn shit.  I want to know stuff. I want to go to bed knowing more than I did when I woke up.

We have this thing on the show, which is like, there’s a lot of grey area in this world and we recognize that. But sometimes we’re right. Sometimes we’re right.  We’re right about standing up. We’re right about fighting companies who don’t have equal pay for women. We’re right about pushing countries, including our own, who lie to people, with clever catch phrases. You know. I’m not right wing or left wing. I’m neither. But ethical oil. There’s something wrong with you if you believe oil production can be ethical in the current way. Now, whether you think it’s important or not, that’s different. I wish they would just say it.

YOU SEEM TO STILL HAVE A SENSE OF OPTIMISM…

WHAT KEEPS YOU GOING? THERE IS A DARKNESS, HEAVINESS AND BURDEN TO SOME OF THE TOPICS YOU CONFRONT…

I grew up listening to Venom and Slayer and AC/DC and Neil Young.  Whereas I don’t believe anything is guaranteed. But I believe, do you like Bruce Coburn? He has a song lyric, “you gotta keep kicking at the darkness until it bleeds daylight”. That’s it. That’s why we do it. There’s way easier ways to make more money and have way less stress than being at CBC in 2012! But I believe in this man. I believe in it. Fuck yes.

I had a guy once walk up to me at a bar, big dude, big bouncer dude, first generation Canadian, waves me over. This is what he says to me,” I love The Hour. You put a lot of brown people on your show. It’s important you put brown people on. I’m a brown guy. It’s not just for people who are Pakistani or Indian, but it makes it feel like we’re invited to the party. We see other faces, other voices. It’s important.”

I think the real strength, especially for guys like me. You know, I’m a 39-year old straight man who likes heavy metal and punk rock. You have a certain edge that comes with that. And guys are really not that interested in being vulnerable. But there’s strength in it man!

You get a guy talking about his mom and he will well up. I well up. Man! I talk about my sister and get (sniffles). I haven’t cried since 1988, but I swear to God, except when the Habs are kicked out of playoff, but I have my moments when I get emotional. Because that’s where its at. It’s about exploration.

AND AS YOU OPEN UP AND THE GUESTS OPEN UP, WE, AS THE AUDIENCE, BEGING TO FEEL SOMETHING AS WELL…

When you listen to somebody write a love song, or a break up song thats ultra-eloquent you don’t believe them. Because break-ups aren’t eloquent. Your’e a fucking mess!

But when a break up song is stuttered and awkward, like when Frank Black wrote, “Cold Heart of Stone”, the lyrics are a bit odd, they’re not beautiful. Some of them are beautiful, but some of them aren’t. But it’s awkward because that’s what its like.

And so it’s the same thing for us in a conversation, it has to be what it is. And what it is could be smooth and hey slappy-slap let’s have fun. But it can also be an uncomfortable pause because that’s life. You have to be real. But with real comes the possibility that you’re going to fuck up and you can’t worry about it. You can’t worry what people think about you. You just have to do it.