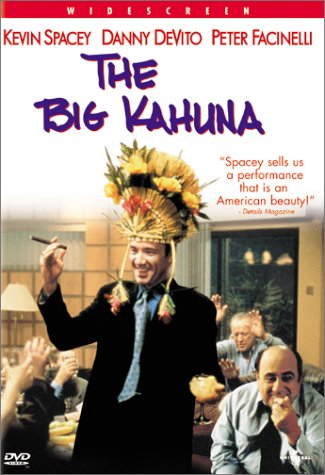 Thanks to Dave Von Biekers recommendation I rented this movie from the library. In fact, here are his direct words: “It’s three men in a hotel room talking about sales, evangelism, job, calling and the razor thin line between them. Two of those men are Kevin Spacey and Danny DeVito in some of their definite best performances. It’s like a play on screen, yes. But a very, very good play.” I wholeheartedly agree. It’s a captivating “play on screen” that leaves you with more questions to wrestle then when you first began to watch. But very, very good questions. For those Twilight fans out there you might appreciate “Dr. Cullen” during his days as a young “research development” person.  Honestly, there are many rich-in-fibre content for you to chew on. Here’s one that still haunts me:

“It doesn’t matter whether you’re selling Jesus or Buddha or civil rights or ‘How to Make Money in Real Estate With No Money Down.’ That doesn’t make you a human being; it makes you a marketing rep. If you want to talk to somebody honestly, as a human being, ask him about his kids. Find out what his dreams are – just to find out, for no other reason. Because as soon as you lay your hands on a conversation to steer it, it’s not a conversation anymore; it’s a pitch. And you’re not a human being; you’re a marketing rep.”