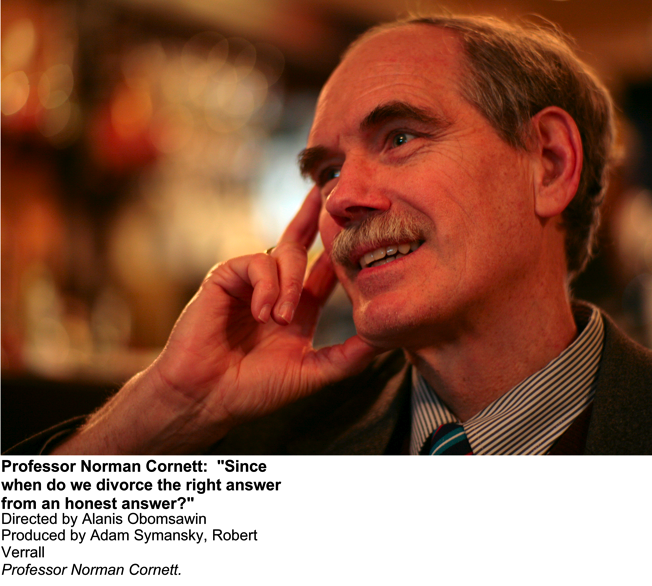 Twitter version description: An unorthodox professor who taught at McGill University for 15 years was unceremoniously released from his position.

Reflection: I don’t think I’ve ever had the fortune of meeting an educator like Professor Norman Cornett. From the start of the documentary you get an enlightening glimpse of what it might be like to have been a student of his.  From reciting Pink Floyd lyrics to writing down unedited thoughts on a journal to having a panel covering controversial topics like Anti-Zionism; you know that you’re not in Kansas anymore. What I found so inspiring was his assumption that students have something valuable to contribute. To him this acknowledgement was more than sentimentality. After witnessing a student having a nervous breakdown he realized there was something wrong with the educational system he was involved in. What is tragic is that the very system he defied ultimately abandoned him after 15 years. You could argue that Prof. Cornett had it coming.  You might even side with the decision to let him go because he didn’t fit the McGill mold.  But you can’t deny the impact he left on his students.  Which leaves me with a troubling question-are educators really encouraged to be creative and courageous with their teaching methods or are they only urged to extract “good marks” from students?

There was a student who was taught about feminism, slavery and racial inequality without it ever occurring to him the importance of actually caring for those issues. That is a troubling confession. On the one hand it gives perspective to everyone who makes a living by disseminating data to some form of captive audience.  Are we supposed to make them care? Isn’t it just our job to get the facts out? Or on the other hand, are we to get our hands dirty and cultivate an environment where data becomes personal and messy?

This documentary can be borrowed from the Edmonton Public Library