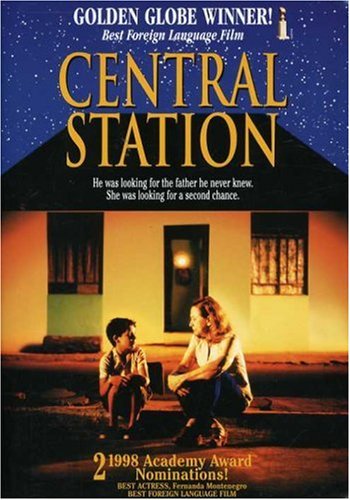 When I was in El Salvador a few years ago my cousins wanted to take me to the theatre. In a solid Salvadorian accent they asked if I wanted to watch “Char-lee’s Engol Dos”.  They never asked, “Hey, do you want to watch the foreign film ‘Charlie’s Angels Two’?”. It would be considered a “foreign film” because it’s not set in El Salvador, the actors don’t speak Spanish and there are subtitles. I don’t know what equates a “foreign film” but in my consideration, for all intensive purposes it was “foreign” to my cousins.  I digress.  Do not let the “foreign language” trick you into believing this is a distant reality. Central Station is set in the bustle and hurry of Brazil’s convergence of the old and modern towns and cities. Fernanda Montenegro plays the role of Isadora, the retired teacher, to such perfection that though you loathe her one minute you love her the next only to loathe her again.  I almost cried, which says a lot because I have a malignant tumor of callousness embedded in my tear ducts.  It’s not the kind of “happy” you expect from the leaking and festering hives of cheap honey that flows from Hollywood. You could almost say that it is a bit foreign.