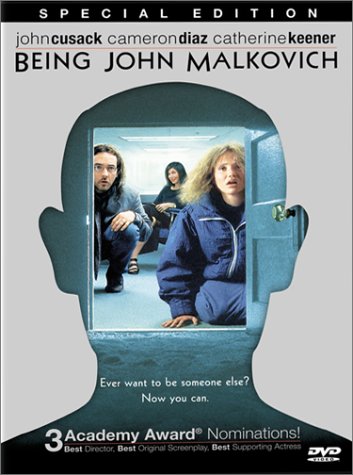 I didn’t expect this movie to be so funny.  John Malkovich dancing like a puppet was brilliant! The 7 1/2 floor is so funny.  In between the hilarity of moments there is a certain darkness that I couldn’t escape. Maybe it was the weird sexual tension between the 3 actors. Or maybe it’s the modernistic simplified nod at reincarnation. Or maybe it’s just the feeling of sinking into the rabbit hole that appears to be “fulfilling” but ends up becoming destructive. I don’t know. I look at my life and wonder to what extent do I attempt to channel someone I admire. In some weird way this film reminds me of something I read about Val Kilmer. In an interview he admitted that as “method actor” he “knows” what it is to be the person he plays “more” than the actual person he is portraying. In other words, he “knows” what it feels to kill someone more than someone that has actually killed.  His translation is that as an actor you are so well aware of yourself that it is indisputable that you have more of an attachment to that reality than someone who is just “in the middle of it”.  Considering those words I wonder what Jonze and Kaufman are saying about our ability to channel the person we admire in a way that is more real than what the actual person experiences.  I digress.