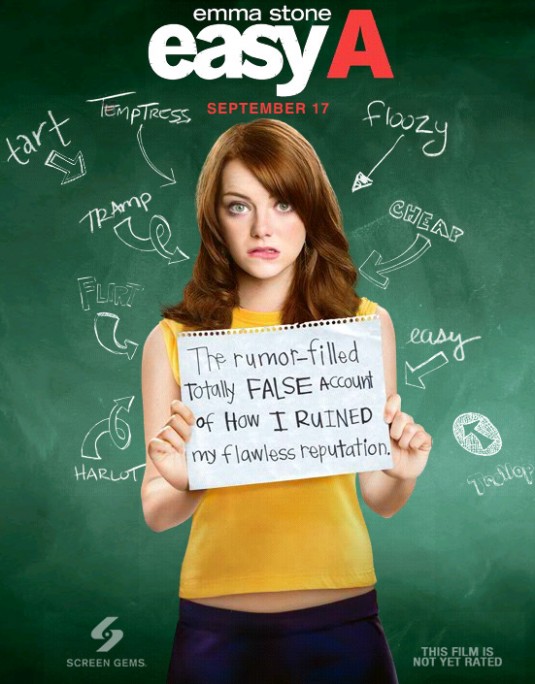 It’s not as good as “10 Things I Hate About You” or as bad as “She’s All That”; it’s in the cool and collected middle of smart and funny. Emma Stone kills it with her natural comedic timing and charming sass. Patricia Clarkson is also worth mentioning because she’s in like every single independent movie and can play any role with class and delightful eccentricity. Easy A is no exception to her repertoire.

Here are a few samplings of the comedic punch I’m talking about:

Olive: We’ve had nine classes together since Kindergarten… ten if you count Religion of Other Cultures, which you didn’t because you called it science fiction and refused to go.

Mr Griffith: I don’t know what your generation’s fascination is with documenting your every thought… but I can assure you, they’re not all diamonds. “Roman is having an OK day, and bought a Coke Zero at the gas station. Raise the roof.” Who gives a rat’s ass?

Olive: Do you have a religion section?

Bookstore guy: It’s right over there. Can I help you with something?

Bookstore guy: That’s in bestsellers, right next to Twilight.